Happy Yoga (Shift Manager - due to getting Robbery on their record for attempting to remove an ATM from a 24/7), Maldini's (currently on medical leave due to major headaches), Gelato & Cats, Yin & Yang, LLC (Cultivator), UwU Cafe

black/red/blue (changes based on how they're feeling)

After being kicked out of their home by their parents at the age of 16, Alyx changed their first and last name to a) go by a name that fits their gender identity and self better and b) to get rid of the family name and cut those ties completely. While Alyx had a hard time after this, they did well in school, got a Bachelor's in English, a Master's in Sociology, and is currently a PhD student. Alyx currently flies back and forth between Los Santos and their university in the Midwest, though they will be seen in Los Santos in their head "grading boosts"...likely while cornering as well.

How Alyx Got into Cornering

The first person Alyx cornered weed for went by the alias, "White Mask" and is in Alyx's phone as "White Castle." They met when White Mask called Alyx about a "food delivery" during Alyx's first week in the city because someone supposedly gave him Alyx's number for that. At the time, Alyx had no idea what he meant by that to which White Mask replied saying he needed some food, was starving, and would give Alyx a few thousand dollars. Alyx tried to get him food from Burger Shot, but was super broke at the time and couldn't pay the full amount because half was in cash and half was in the bank (and Alyx didn't know there was an ATM nearby at the time). Somehow, the food got paid for and Alyx was told to give it to White Mask at the airport. It should also be noted that, during this first week in the city, Alyx didn't get a car from the state and was only able to buy a Cruiser bicycle with the money they had, so they rode their bike over to the airport. When they got there, White Mask thanked them for the food, gave them the money, and asked if they wanted to make more money by cornering. Alyx said yes and they learned how to corner from a News Rumpo, first using White Mask's and then, with the money they got from the first bit of cornering, with the News Rumpo that Alyx then obtained afterward. Alyx still has that News Rumpo to this day.

Alyx starting boosting with Patrick Stah after they were going to go with Fry Hitchens before he left the city for a bit. The first boosting contract that Alyx received was a Robin which turned them off of boosting for a bit. Then they started boosting with Jix and it turned into a nearly daily activity for them. Around this time, Alyx would also boost with some of the Yin-Yang Family, mainly Roy and the two kept boosting together after Jix left the city for awhile. While Alyx is not good at driving, they are pretty decent at using the hacking and tracking tools to get the car and disable the tracker. There was one day where Alyx successfully hacked for three A+ boosts: (1) with friends from Mayhem MC, (2) with members of HOA, and (3) with Roy Wilson with members of HOA on radio. After that, in an A boost, Alyx and Roy got arrested after the hacks were complete because the car flipped over at Burger Shot.

Currently, Alyx is at S+ level for boosting after scratching an Adder.

Criminal Record and Interactions with the Police

A majority of Alyx's drug arrests were done by Chief of Police Frank Williams. Many of their interactions involve Alyx discussing topics related to society such as research ethics, gender-based harassment, etc. Alyx, while they'd talk about those topics anyway, usually does this to either stall or try to get out of getting arrested.

As for the charges regarding cars and driving, Alyx is notorious for being a terrible driver. However, it took until about two months in the city for them to finally get a reckless driving charge. This was obtained after "bubbling" a cop car (in Alyx's eyes, they barely grazed the cops but, in the cop's eyes, Alyx hit them head on) while having some bags of meth on them. They originally were going to get Possession with the Intent to Distribute which would've been 150 months by itself and Assault with a Dangerous Weapon with that weapon being their Sabre Turbo. This got reduced to around 70 months after charges were reduced and then around 40 months after a guilty plea with the help of lawyer and manager at Maldini's (where Alyx worked) Scott Free.

With that being said, the only times they got Reckless Evading on their record was when they were a passenger for boosts as a hacker. This is something that Alyx thinks is dumb since one should only be charged with that if they were actually doing the driving. This has led to major trust issues with the PD as well as distrust from other instances such as officers (especially the Chief of Police and "Bowl Cut PD") calling them dumb and not letting them speak on their point of view to get the full story at all. 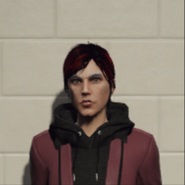 Mugshot after their third arrest for an A+ boost 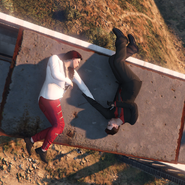 Alyx and Roy's first date on the Vinewood sign
Community content is available under CC-BY-SA unless otherwise noted.
Advertisement